Next Prev
Home  Making Techno  Producing  What do I need to make Techno Music? 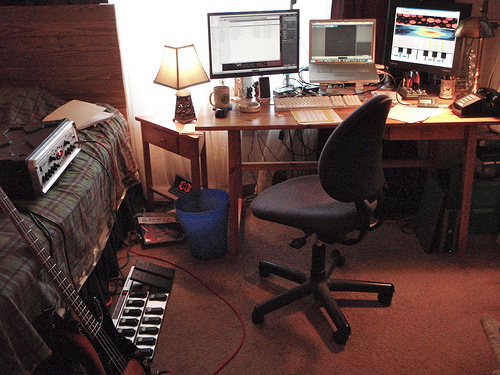 Techno is one of the musical genres that would not exist without the excessive use of technology. Maybe that’s a bold statement given the fact that Guys like Sebástian Zoppi or Dario Rossi make techno with nothing but a few buckets, but given what we see if we watch techno artists performing it’s no wonder one of the most common questions beginners ask is “what do I need to make Techno music?”. After all, Techno godfather Juan Atkins said himself maybe two decades ago that techno is all about music that sounds like machines, rather than machines that sound like music.

We watch videos of artists like Carl Craig, Drumcell or Guy Boratto and see them sitting in their impressive studios, surrounded by walls of synthesizers and of course we think that this is what is needed to make techno.

Requirement one: The Urge

You need to feel the urge to create, you need to feel the urge to express your feelings, your emotions musically because that’s the only way appropriate for you. It’s the deep inner drive. The feeling that there is something in you that needs to get out. The feeling that you are but a mere medium for the music. Or, as the great Steven Pressfield puts it, artists are not the source of the creations they bring into being; Artists only facilitate.

That is, above all else, the requirement number one.

If you want to make techno because you love going out and to see all those djs, and you want to become one of them and get all that attention, then that’s the wrong motivation and you will never be better than mediocre. The techno scene really is a great place to be and the desire to work where your heart is legitimate and totally understandable and there’s a place for everyone, even if you’re not as creative as you think you are. Last year, I heard Gordon Gieseking, founder of Project: Mooncircle, in a discussion, stating that he was a producer when he realized he’s not good enough to make it big so he founded his label which has now become one of the most prestigious indie-pop/electronica record labels.

Ok, but let’s say you feel that urge. What more do you need?

Ok, that’s maybe most of you wanted to read about when you opened that article. You didn’t want a talking to whether your motives are pure, you probably wanted to know what equipment to get if you want to start out.

The equipment you need can be roughly divided into two categories: hardware and software. There is a plethora of variations and combinations that are viable to choose from. Given that you’re just starting out, you really should limit yourself to start out small (you can read why in my article I want to start producing techno music – but how?), not only because of monetary reasons.
What I’m recommending here is the most cost-effective way from how I see it. Plus, you’re just starting out, remember? No painter got into painting using the most expensive oil paint on canvas and easel, no, they all start with a pencil, crayons, or watercolors on scratch paper.

The first piece of equipment you need is a computer, and I’d recommend a PC for various reasons, only two of them being cost-effectiveness and availability of free software (and I really mean free, not pirated). You do not need to think about stuff like audio interfaces or a big powerfull machine for now, a mid-range PC with a pair of decent headphones will do. I really don’t recommend making music with headphones for the long haul because they lead to numerous typical mistakes but we don’t need to occupy our minds with that for now.

Ok, so you’ve got yourself a PC. Now what? The next thing you need is software. There’s one central type of application essential to all digital music production, the DAW (digital audio workstation). It’s the piece of software that controls what sound is played at what time in what manner.

Although my DAW of choice is Ableton Live, and personally, I think Live’s workflow is one of the most taylored to electronic music production, the price tag that comes with it can be quite hefty for the beginner. Reaper, on the other hand, comes fully fledged as opposed to all other relevant daws which have a seriously feature-cut in their entry versions. Plus, it’s free for the first 60 days (and it’s technically possible to use it without limitations after that period although doing so would violate the license agreement, I suppose, so, you know, don’t do it).

Now, having chosen a DAW of your liking, you need instruments you want that DAW to play for you. Plus, cazy effects. Plus, maybe some samples?

The market for free stuff is vast and many people have covered that, so instead of another lenghty explanation I just point you to the bedroom prodcer’s blog and what they gathered 🙂

One personal recommendation: if you search great free drum samples, head over to Wave Alchemy: imho, they offer the best classic drum samples for techno music production and they have som free packs.

If you have a question or want to get in touch, leave a comment down below. Plus, don’t forget to subscribe to the Aural.Letter to become a member of the Aural.Family!